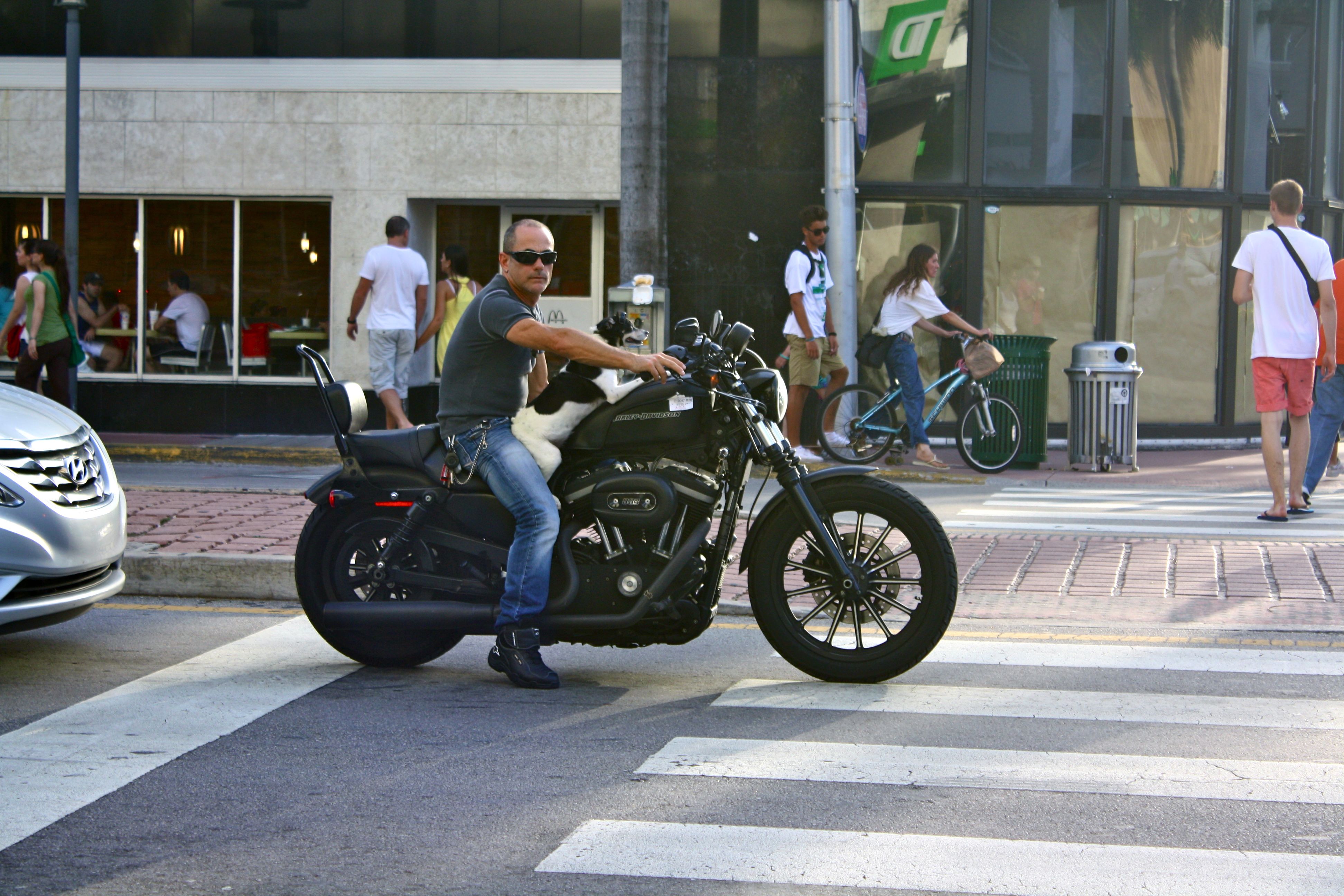 I was strolling down the famous Lincoln Road, Miami Beach the other day when I came across this perfect picture. How better way to show love for your animal than take him for a drive?! Didn’t read much into the owner’s stare but it looks like the dog was having fun. Look how comfortable he appears on the bike? I wonder what his name is! 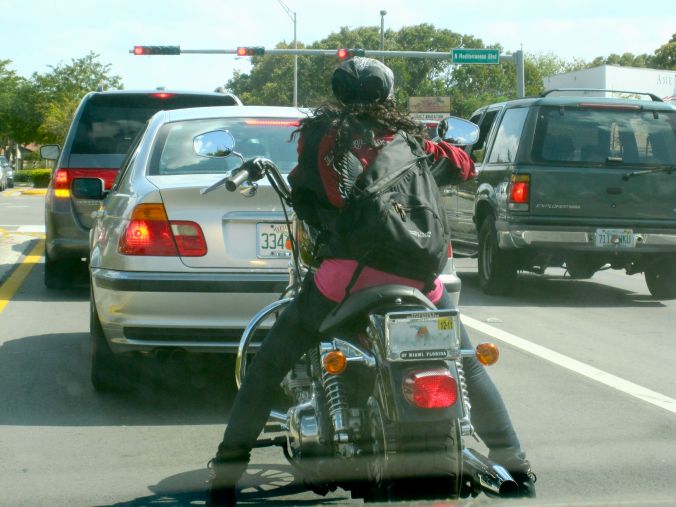 In the meantime, this is my neighbor, not really, she lives around the hood, on her daily routine. I wonder what her name is! 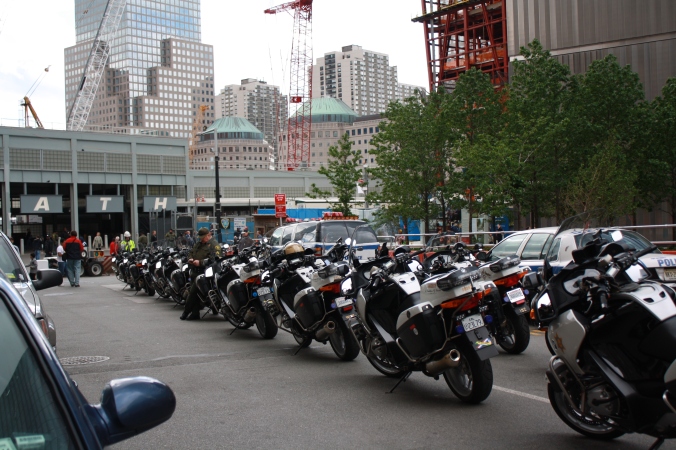 Policeman in NYC at the World Trade Center. 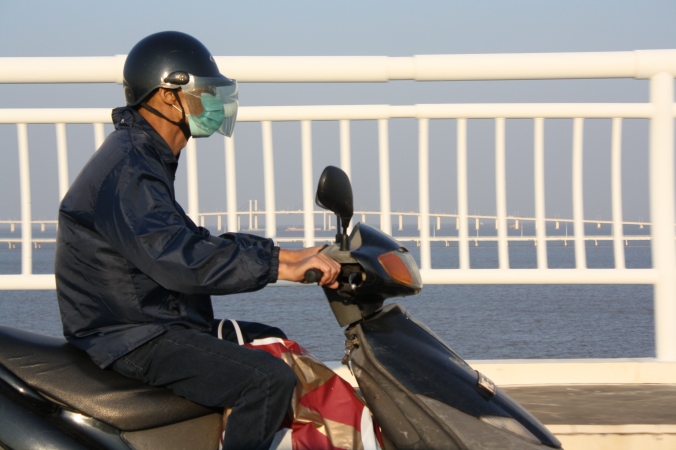 Somewhere on a bridge on his way to Taipa, Macau at hills of bird flue. 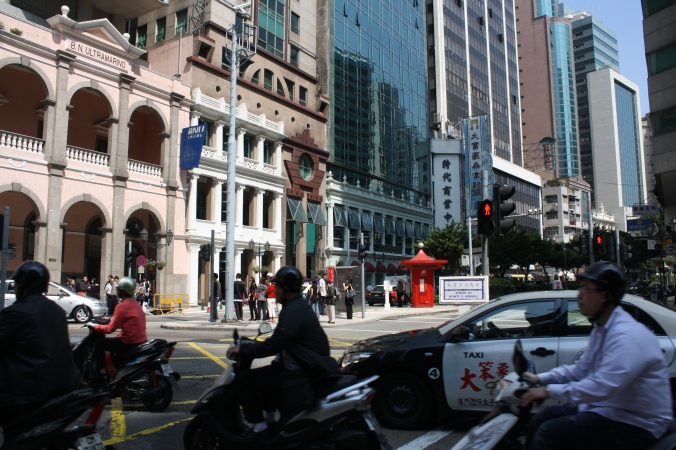 Biking is good for the traffic and gas but it can also be, one mean killer machine!

New and innovated Mercedes-Benz. Not! Creativity for all its worth! 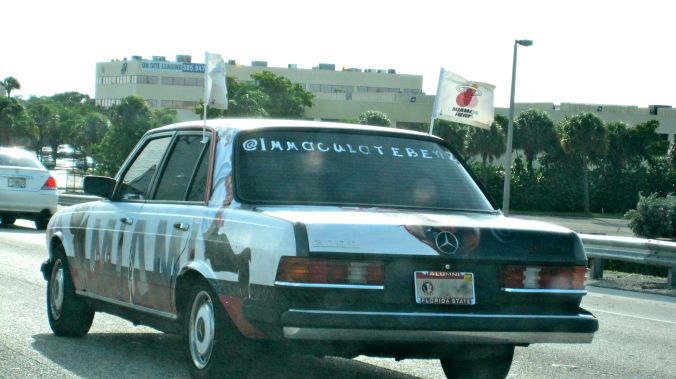 This will surely fall in the category of Something I Will Not Be Caught Dead Doing for sure!

As the say goes here, you not only drive for yourself but everyone else. This is how some drive In Miami.

The road is their oyster, their toy and you are not invited to the play. You need to constantly be on the alert, on guard for the other driver. They come out of nowhere with a force of 100 pound gorilla, forcefully and your breaks better be ready, on their toes, fine and tuned just enough for you not to hit a third driver while dodging the first. It is a given and they are never apologetic.

It is comical but it is true. They don’t care. They have no regards for anyone or anything and seem to always have the most proverbial excuse on the table, “this is the way I drive in my country”. Fill in the blanks with the countries. You name it, they are on the list!

They just go without regards or thought. They speed, they zigzag, they give you the middle finger or hunk back when you hunk at them. They believe they own the roads and have rights to it, “freedom of speech” as they say and for that, they are allowed to do whatever they want and you as the other driver, better fend for yourself. 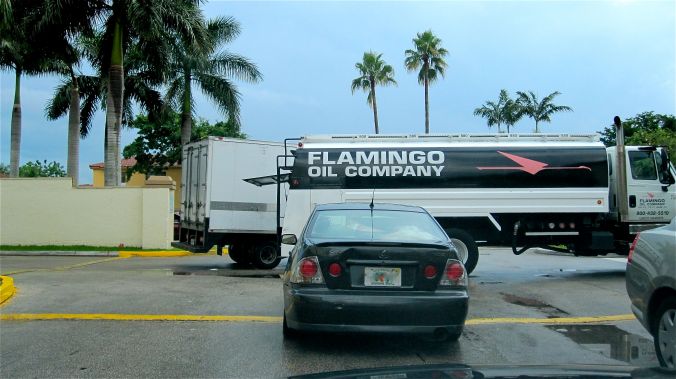 Just picture this, coming out of a strip mall. I am behind the Lexus and can see it coming. I smell it. This is Miami and patience run thin; it is not a virtue. I blame it on the heat. Pardon me, I blame everything on the heat because that’s the only thing that makes sense.

Gridlock to the max. Three vehicles were trying to exit at the same time but the Flamingo oil truck found itself in a peculiar position and needed to back up first. But it had no where to go as it had to wait on the other truck caught on the red light to move first, before it could move. Meanwhile, we all waited. Remember, I am behind the Lexus and to my right, there are cars parked in the emergency lane. So, we were already in the middle of the road to begin with. 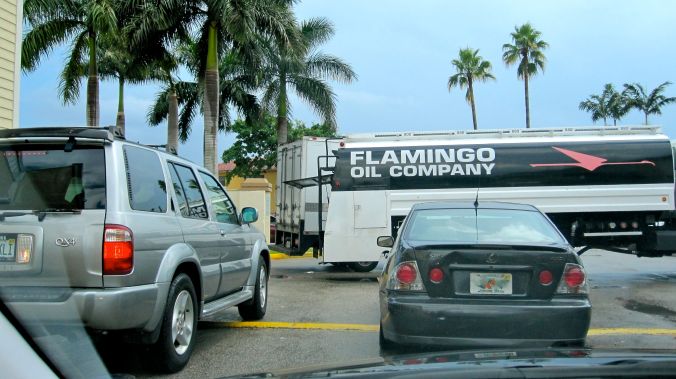 While waiting for the red light to change to green, the two trucks to move, there came another driver, speeding down as if in hurry. Huh?! This is a two way street, where did he think he was going? First of all, he was on the wrong lane, I can just imagine what could have happened if another car was going straight ahead in the opposite direction. Touche, it would have also got stuck as it perhaps, would not have anywhere to go. Second, where was the driver going? We were sitting ducks, the road was blocked, the oil truck still not backed up and we were all waiting. But that did not stop the driver of the Infinity QX4. He just wanted to go and going, he was. 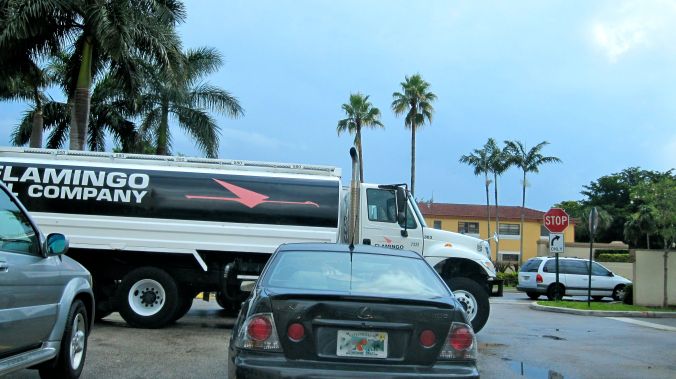 Finally, the oil track gets going. The traffic was moving. 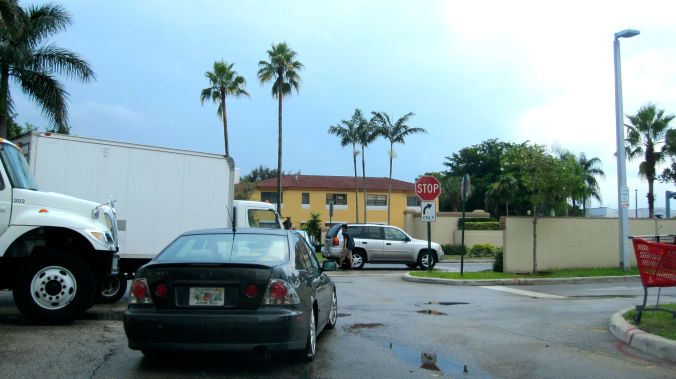 But before he could breath, there went the Lexus. I wonder what happened at the traffic school. 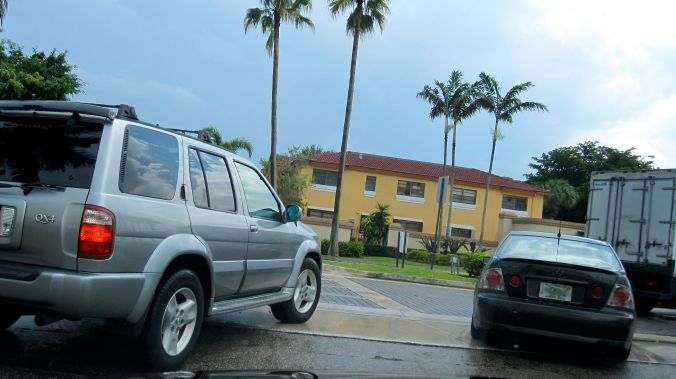 Meanwhile, I am sitting, waiting for my turn. I am next, I am thinking and I am going straight but wait, the oil truck had still not moved. I will go as soon as he goes. Nope, there was not to be! Like Speedy Gonzales, there went the Infinity driver without a care in the world. What if the oil truck had moved? Imagine if I had gone straight as expected?! Yup, you not only drive for yourself but everyone else too because everyone is in a hurry. To where? I have no idea; perhaps, the traffic school?!

After all that rain, three months worth in four days, the sun peeked a little.Today's sunset South Florida style! * * South F L A * #sun #sunset #sunsets #sunrise #sunrises #sunrise_and_sunsets #nascerdosol #sol #clouds #cloud #mothernature #nature #natureza #sky #skies #climate #clima #photography #breathe #breathing #beauty #love #miami #dade #southflorida #south #southfloridablogger
Happy AFRICA Day my african peeps tribe. . My suggestion to African leaders, do right by your people. It is time. It is due. Stop with the nonsense already; it is getting old and used up. Africa is one of the richest continents and yet, poor. We cannot continue living in perpetuated enslavement trap when we have it all to stand on our own. We can and should strive for better. . And to my African people, wake up, just wake up. Stop feeling prey and victim to washed up leaders who don't have your interest at heart and to those africans who only think about their pockets and interests, you are part of the reason we continue to be where we are.Yes, you. If a leader stinks, he/she stinks but some keep peddling over one revolving door because it suits them. NO, stop settling for less. We are better then that. Rise up. Blessings to all. 🇸🇹🙏🏽❤🥂 . Obs: I do not take credit for the photo * * * #africa #africaday #africaday2020 #africans #african #africanpeople #african continent #pride #joy #love #africansoul #motherafrica #africandesigners
As African as my parents made me. Daughter of the continent. Proud. Blessed. Grateful. African. Rippin from Sao Tome and Principe. 🇸🇹 Happy Africa Day! Shoutout to the dress maker, me! * * * #africanday #african #africa #saotome #saotomeandprincipe #africandesigners #africanwomen #africanwoman #africanstyles #africanstylist #proud #love #funday #gratitude #blessed #style #stylist #styling #casualstyle #estilo #blessings #moda #fashion #fashionblogger #joy #miami #florida #southflorida #southfloridabloggers
When you let your sewing room open and take a picture with it serving as the background. Woke up this morning and went to church, virtually. I was led to hear a sermon by TD Jakes God intended me to hear; one perhaps, I have been waiting for a while. It is one of these things that came at the right time and moment, and considering it has been one rainy gray day so far, it is paying its dividends. I am pumped. Here is to Sunday. Cheers! * * * #sundayfunday #funday #sunday #sundayattire #church #catholic #faith #gratitude #quarantine #greatful #blessed #style #stylist #choir #mood #styling #thankful #casualstyle #casual #estilo #blessings #moda #fashion #fashionblogger #love #joy #miami #florida #southflorida #southfloridabloggers