Yes, the sky was this blue, the sand this white and the clear blue water, pristine. You would dive and swim like a mermaid, run free like a crab, fly over like a bird, breathe fresh air endlessly, immerse yourself into the abyss of serenity, the endless frisky breeze and the effervescent sound of the wind. Sunglasses on, you would lay on the ornate groovy beach towel, smile and temporarily forget that nothing else mattered. Just amazing and complete utter stillness of the zen type. St Petersburg, the west coast of Florida.

I and a couple of friends visited Warren, a suburb of Detroit, back in July for one of our choir member’s wedding and decided to mix business with pleasure. We had never been to Michigan and since we were there, decided to explore. I mean, don’t never say never but where are the chances of I landing in Warren, MI?! Although, this is where the GM headquarters is located, it was not on my bucket list but since I don’t like to leave anything to chances, I had a “what heck” moment, did the hoola hoola dance, hop on the plane with the rest of the crew and there we were in Detroit tramping our way to Warren.

It was a gray July day, summer was in full bloom but it felt more like Spring. There was not a cloud in the sky as we headed out, loaded with all the GPS’s our phones could provide in search of a little town in the middle of Michigan. All I heard is that it was located somewhere after Flint and it would take approximately a hour and half and if we play our cards right, we would be back in time for the rehearsal. 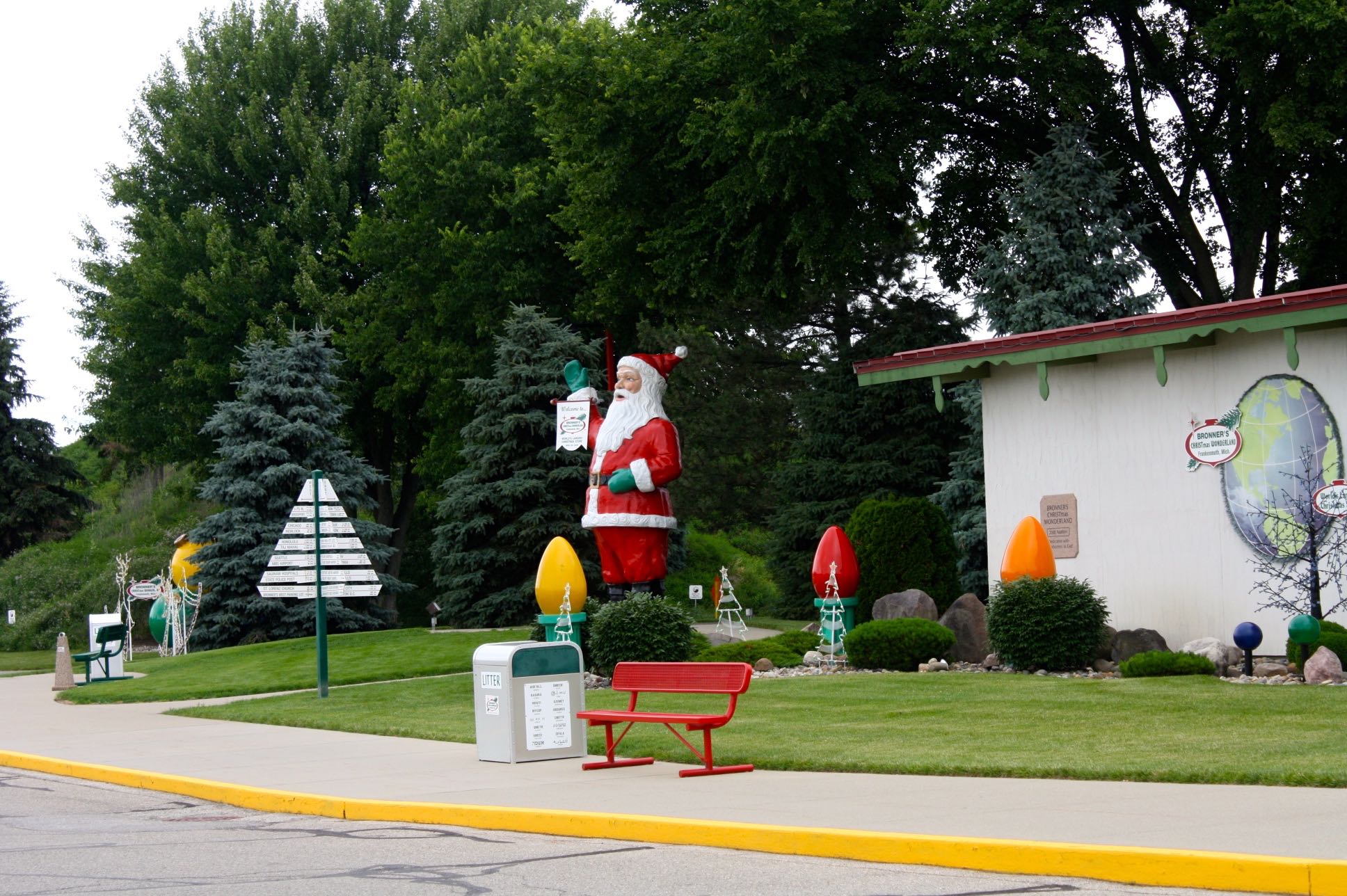 I have never heard of Frankenmuth, Michigan then again I was not familiar with many Michigan cities and towns in besides Ann Harbor, Flint and Detroit. I din’t, then again I haven’t adventured much in the midwest direction anyway, so it is understandable. It certainly wasn’t on mine or the others’ radar but one of the ladies. I was on my way to the Motown museum until she suggested we do the town first, to learn later that it was 4th of July and the museum would be closed. Oh well, there. One more reason to pay Detroit a visit again. 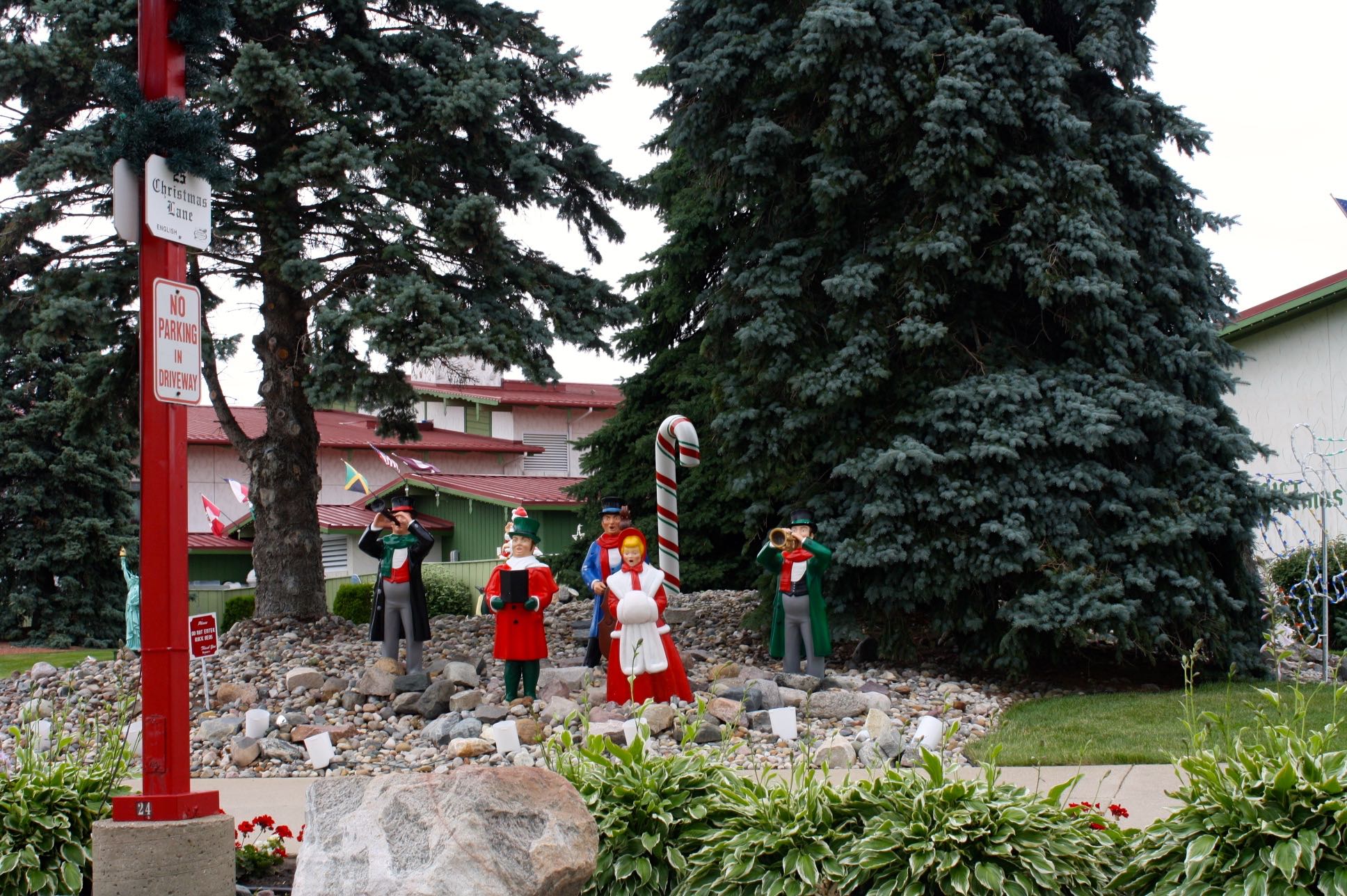 It was gray and cloudy, it been raining a little, when we arrived in Frankenmuth, a little of town located within Frankenmuth Township, population four thousand plus. The town was formed back in 1845 by conservative Lutheran settlers from Bavaria, Germany. It is an exciting little town with visitors hovering around every corner. The main street embraces Bavarian culture. It is filled with crafty little stores, restaurants, carriages everywhere… it exurbs German hospitality. It hosts many festivals and is home to the world’s largest Christmass, Bronner’s Christmas Wonderland.

Yeah, it was Christmas in July alright because it was raining christmas. Christmas ornaments, Santas, collectibles, christmas trees, christmas signs, Silent Night Chapel, christmas up, christmas down, christmas rolling, you name it, it was all and more in a bag of chips packaged in one little junction. It left me at hello!

The Nativity is in display 24 hrs 361 days of the year. I found it magic and went running like a kid in a candy store snapping pictures here and there, jumping up and down like a squirrel. We spent so much time in the town that we found ourselves negotiating with time, driving like maniacs as we were running late to the final wedding rehearsal and the dinner that followed. I am happy to say that we were, hummm, just a few minutes late. Not too chubby considering that we were not the only ones. 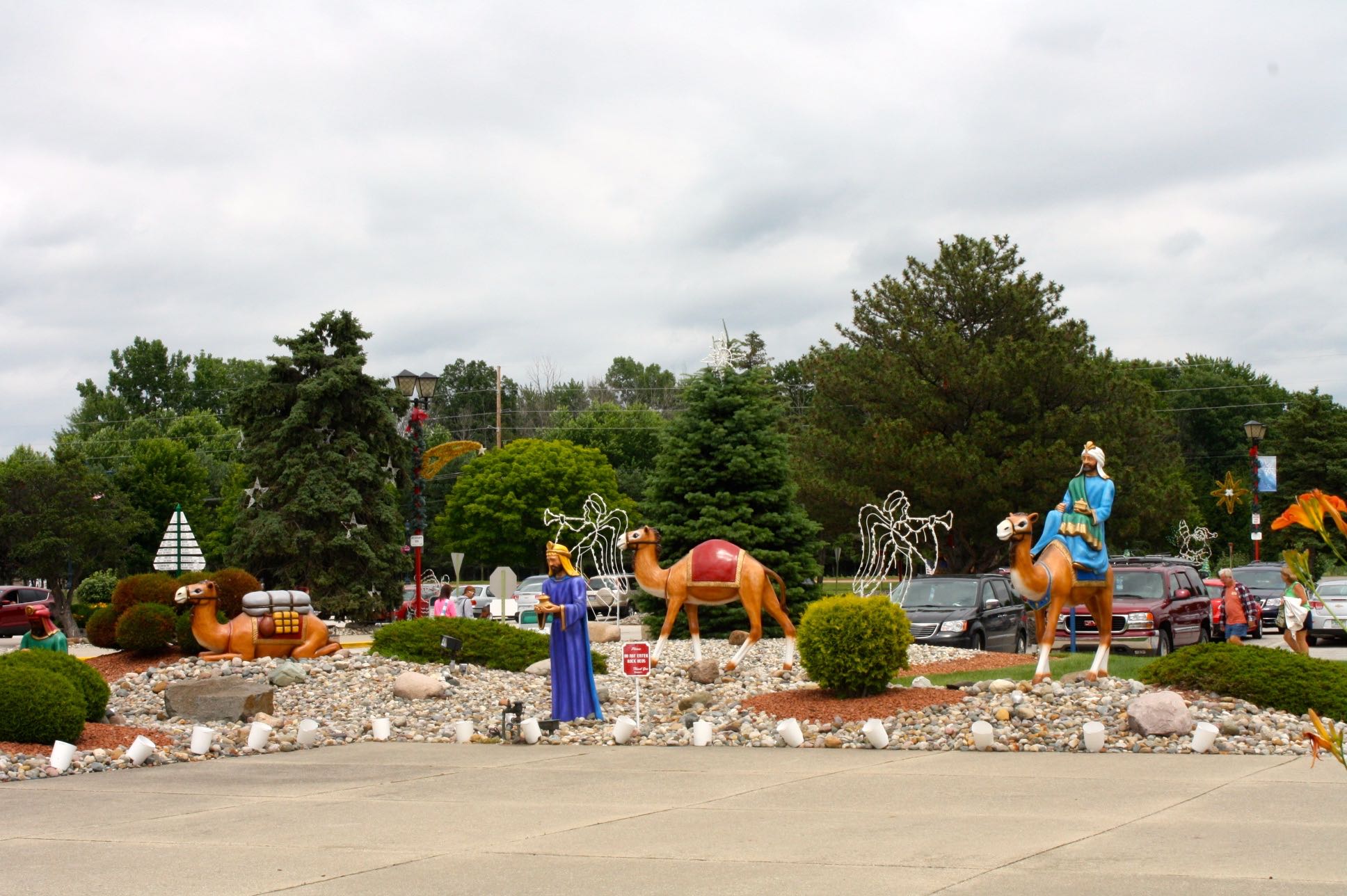 What other occasion then today to share the store with you? Enjoy it and if you are up that way, just stop by. You will love it. 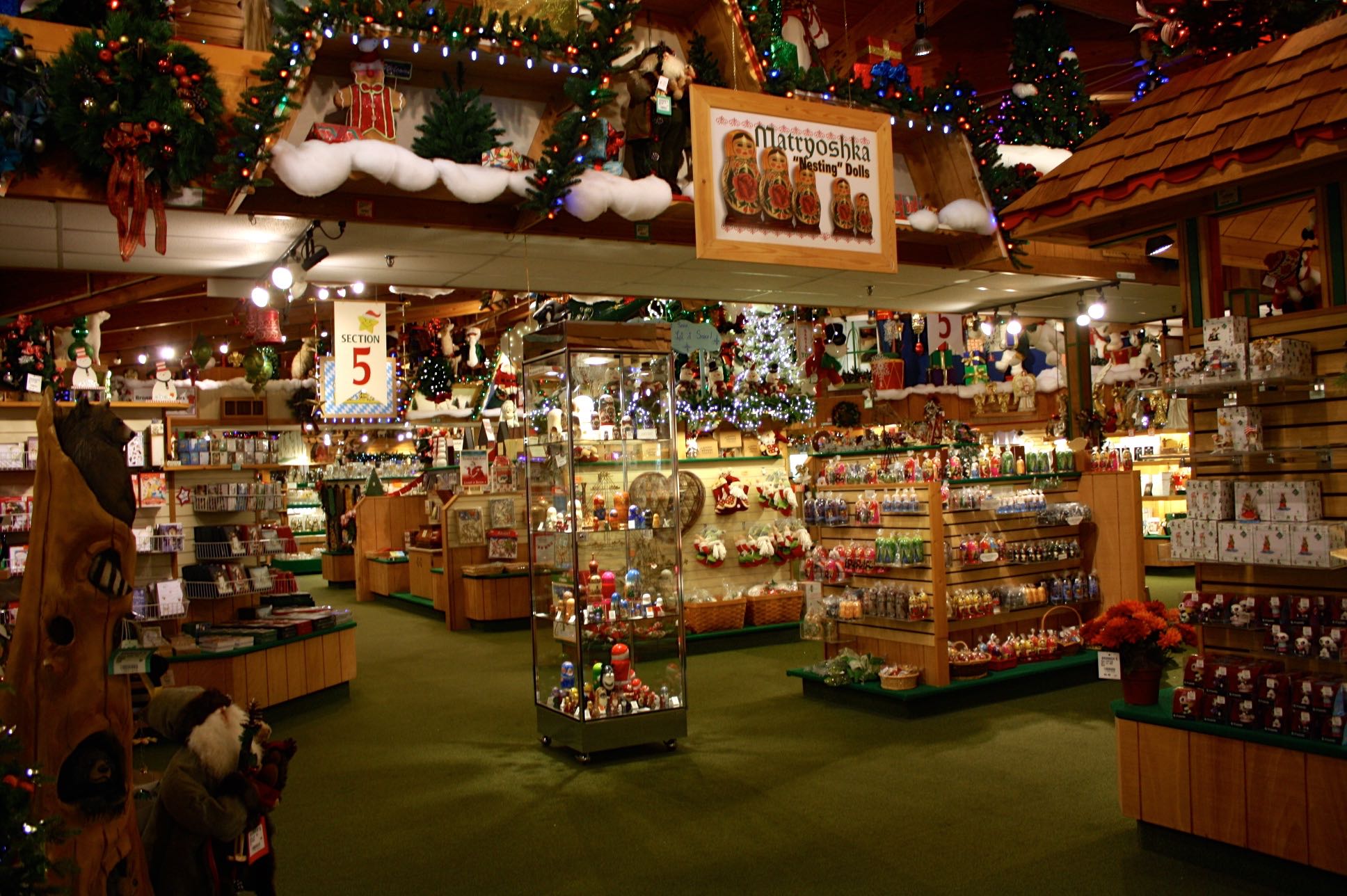 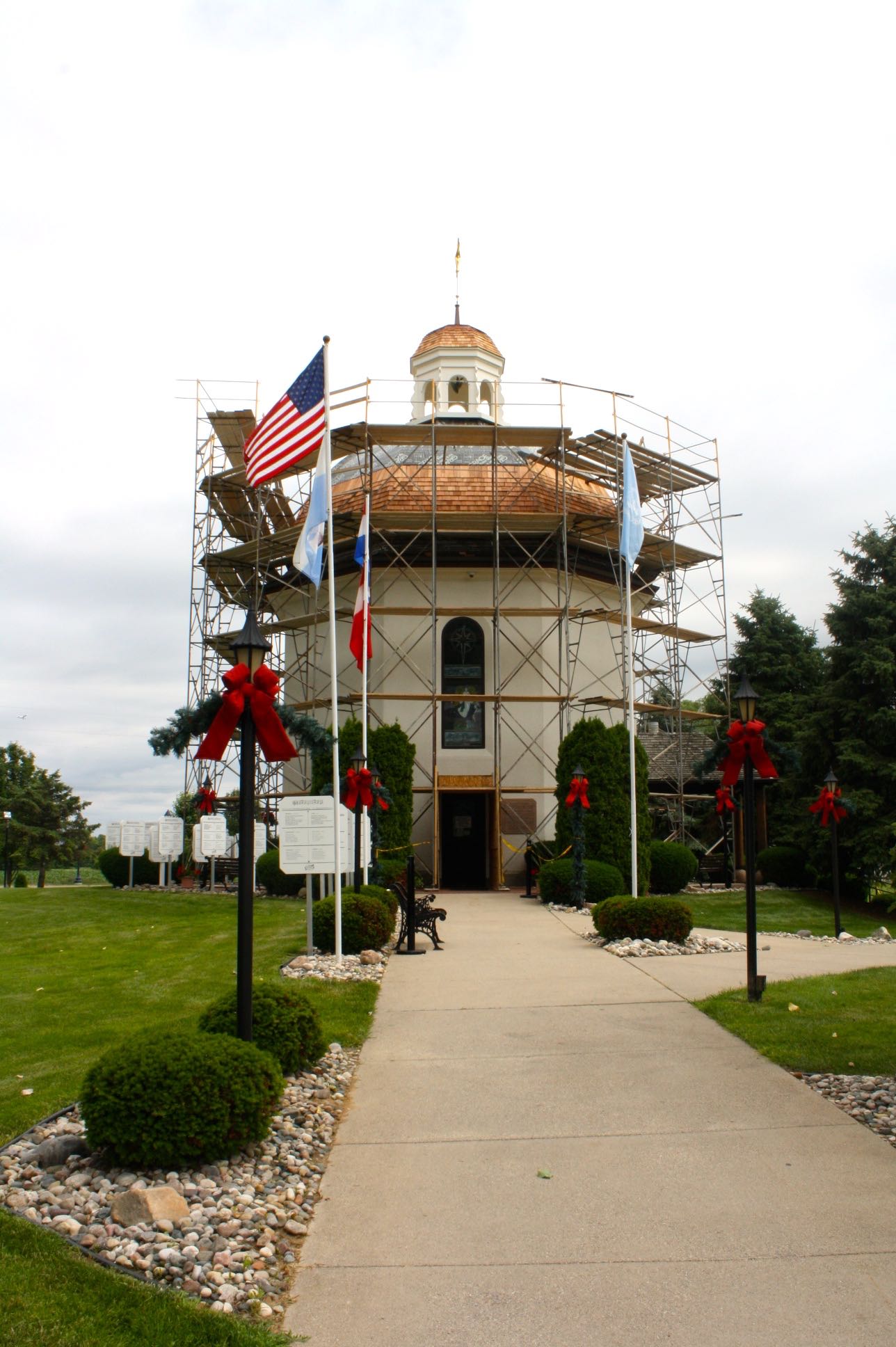 It was being repaired when we visited 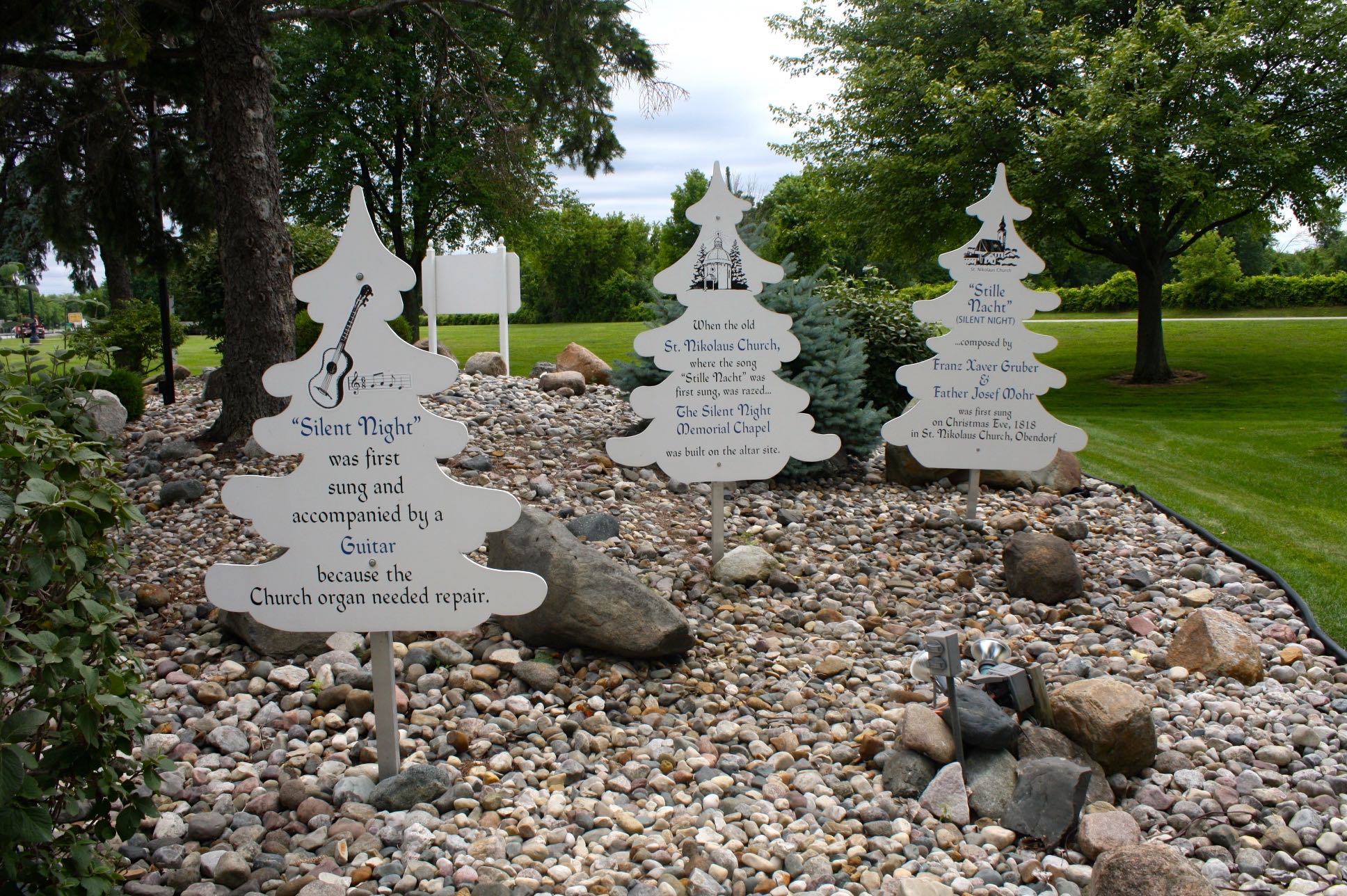 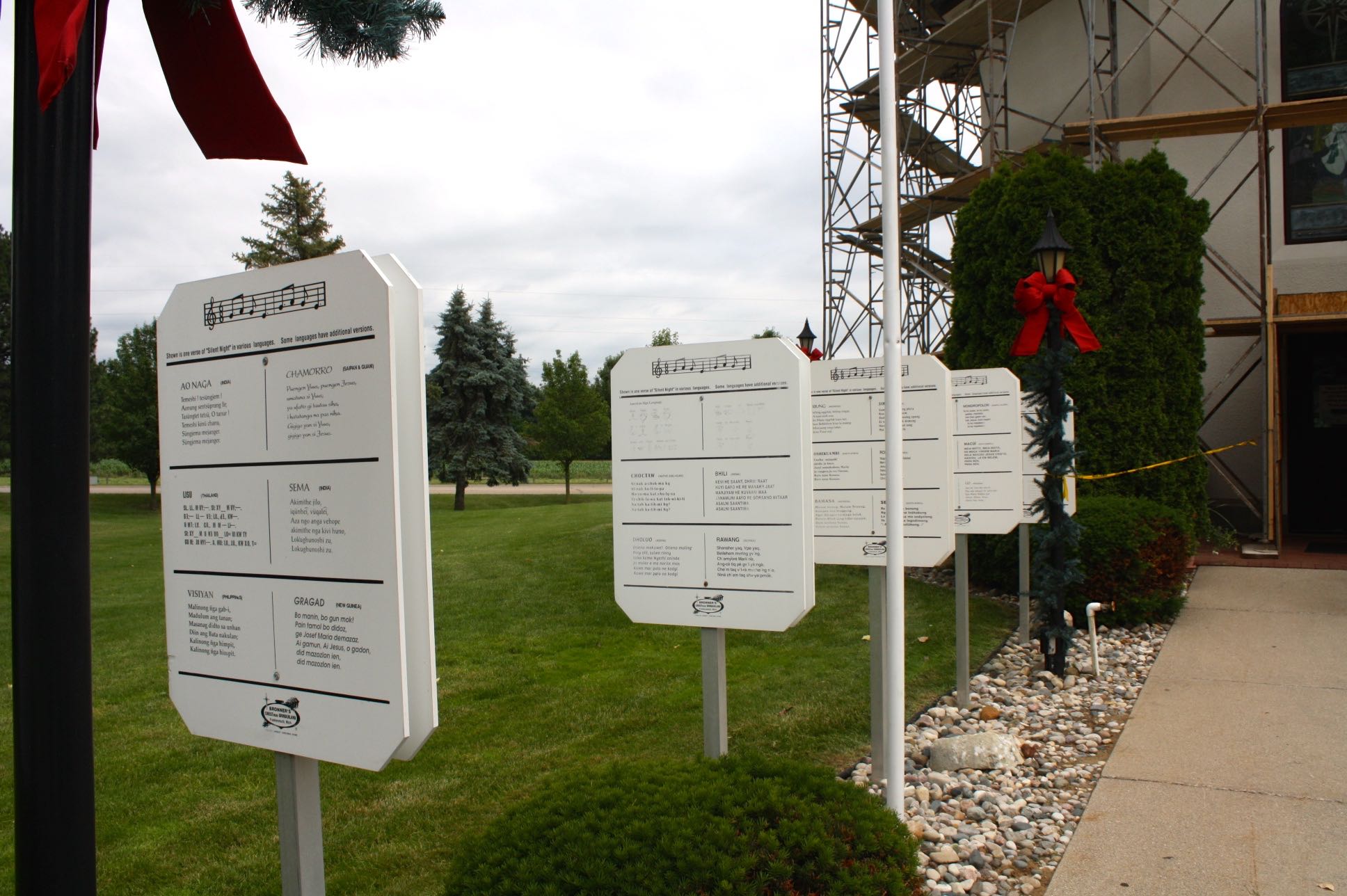 A little history on Silent Night as you walk in

Inside the building. Translation please!

I think I was dancing my way out of the chapel because I really don’t know what I was doing.