Elizabeth beams, gets intoxicatedly animated, her eyes lit every time she tells their heartwarming love story, on how they stumbled upon each other that sublime day in December and why not?

We all have stories on how we met our amores, I met mine on an airplane that was about to crush, seriously, true story but I save that for a later date. They are always fascinating and divine with tale of their own to tell. Some are funny, others trite, and others just down right cramped, hint hint, blind dates but they are yours to treasure, perhaps, write a novel or pass it on to your grandchildren. Whatever the situation, it is your one and only unique libretto to keep. 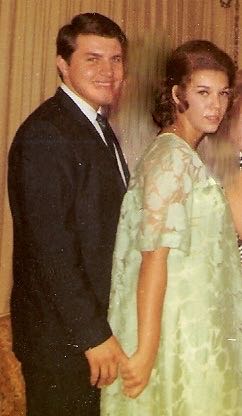 I wanted to share their story because I found it sweet, endearing and also interesting that after some many years, they are still in love, the lust and devotion are still there. They dote on each other. They are eternal soulmates who have mutual respect and deef affection. They are like glue that keeps on sticking who have been apart only twice and for no more than a week.

It is charming to hear and observe her narrating their story. She melts. She smiles with gusto. I sensed the earth shaking beneath her, her knees quivering, her heart pumping faster than an ostrich still. The details unescapes her. It took me there. I dreamt a little. It made me wish I was single again meeting my prince on a carousel at Disney World. Yes, I too wanted to be there watching from afar. Oh romance!

Faith runs deep in their marriage and perhaps, is the pillar of strength that bonds them together. They are two beloved members of Lady of The Lakes Bible Studies in Miami Lakes, Florida and this is how I met them. So, today being Valentine’s Day, I invite you to relieve their story. Be Elizabeth and Joe!

“December twenty seven nineteen sixty four. We, my friend and I, went skating at Branch Brook Park in New Jersey. It was an Ice Skating Ring at the time but a roller skating rink now.

Then we went home and for two weeks, we didn’t, well, I thought about him and didn’t think I would see him again.

January tenth nineteen sixty five which was a Sunday. We get there early in the morning. He got there with his friends and I with my friends. One of the people who was in his group saw me, and before we started skating, she approached me and asked said, “You want to join our group?” “Yeah sure”, I replied. “I would love to join your group.” So, we all went together. She introduced me to everyone, except Joe.

I skated with most of the boys in her group who asked me to skate, and then, finally, a few hours later, my, the friend that went with me, got very upset and said, “Stop skating with them. Let’s skate together.” So, we started skating together.

Me, Virginia my date, were trying to make a circle and all of a sudden I fell, hard. I was sitting there in the ice for a while, laughing, as matter of fact, everyone at the skating ring was laughing too and then, I felt this. I open my eyes and I see the, a big hand in front of me. I look up and it was Joe… “Oh my God, it is Joe”!

He helped me out and then asked, “Would you like to go have some hot chocolate?” I quickly said, “Yeah, sure!”.

We sat down and started talking and by the end of the evening, he says to me, “You know, I remember I saw you from far away two weeks ago and I have been dreaming with you ever since.” And I said, “Oh, I do remember that day, oh my goodness. I do remember”. So, then our lives started together and from then, it has been beautiful, blessed, lovely and wonderful life.”

The couple on their 40th wedding anniversary

The couple have been married for 46 years and have two grown children. Today is their 50th Valentine’s Day.

I want to be like them when I grow up.