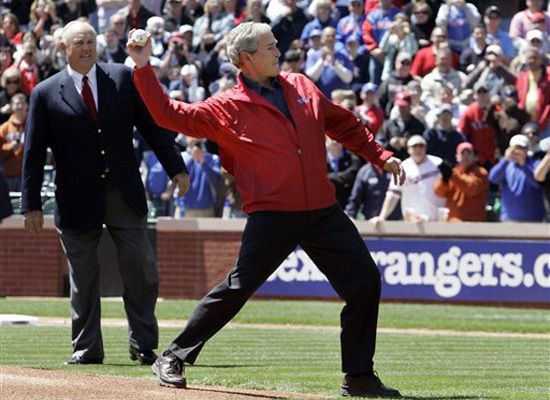 Give credit where credit is due.

At a private luncheon speech in Calgary – an audience of his admirers – last month, the former president George W. Bush said: “I’m not going to spend my time criticizing [Obama]. There are plenty of critics in the arena. He deserves my silence.” as we learned of a planned Bush administration reunion with the likes of Condoleezza Rice, Karen Hughes and Dan Bartlett. Conspicuously absent from the gathering: Dick Cheney.

I would like to give props to former President George W. Bush who unlike Vice President Dick Cheney (c’mon Dick, you had your moment in the sand; time for the La-Z-Boy) as well as Karl Rove, chose to take the high road and not engage in an acerbic criticism and snippy back-and-forth with the Obama administration.

Say what you may, think all you want about W but it takes a person of character to embark on a higher than life road trip ego train. I can just hear some folks clinging their fist.

W has exhibited great disposition or possibly, he is clutching his judgment so, he can illuminate us later on his upcoming seven million dollars book. Hey, whatever tickles his fancy! I don’t fault him. After eight years of public service, good or bad, of jumping on a trampoline, he ought to have the opportunity to enlighten us, in plain words or whatever it may be; what was really going through his brains when he made some of the brazen decisions. There is if he is willing to share this much as we are still feeling the ripple effects of the aforementioned decisions. I personally am curious.

Although, no longer holding the wheel and regardless of missteps and bloopers (he really gave the comedians a book full), he could use the opening to be an ass, bamboozle the current administration and rootle the conservatives; but no, he chose instead to fluster some of the base and go about his business. Perhaps, if he stirs the pot a torrential wave will shuffle back to him. Whatever his reason- c’mon, the field is wide open – after eight years of turmoil and gang warfare, who needs a fight?

The engagement in Canada was a private affair with only his invited peeps who paid big bucks in attendance and yet; he chose to stir clear. Not one ounce of controversy and for that I take my hat to him.

I was one of the many on the other pointer of the equinox who did not see the use for the “hit the road Jack” sendoff and the mockery of 43rd whilst the helicopter was going up. It was inappropriate yet I do not condone those who did it. Everyone is entitled to his or her opinion and as sadistic as it may have been to some, it sure was gratifying to others. How they chose to manifest their delight was up to them. To each’s own!

I recall stating the inaptness of the behavior to some friends. I was disappointed for the simple fact that good or bad, no one is worthy of the humiliation (even though, I was relieved that the end of what he represented was before us). Perhaps, the gripe, an indicative to why Laura “forgot” to watch Obama’s State of the Union as she indicated on an interview. Her answer was that she did not remember the date. Ok Laura, I too forgot my birthday!

Picking up and go is not easy. Saying goodbye is never comfortable.

Having lived in a place for eight years, he certainly rubbed and formed relationships with many. Granted, he can come by and visit but it is not the same, as he no longer rips the benefits he previously enjoyed. I am pretty sure he wishes to stay as far he can from Washington.

His face did him in as he was overwhelmed, anxious but as one good Texan (cowboys don’t cry, they just suck it up), he could not show it. Imagine, George Bush breaking down in a weepy sentimental stormy love fest of good ole tears. Oh lord, the press would have had a field day.

It was not like he actually was going to miss much as he spent most of his time in Crawford anyway but still, perhaps, there were some tears shed, as it was obvious he was a little melancholic.

Apparently the new one is quietly coming into his own as he has also learned that the big parachute dwelling is nothing more than an isolated big ole birdhouse. He too announced that he would also be spending a couple of days away in Chicago. Right on! Really who would like to get attached to a house that is not theirs anyway? Think of it as a Bread and Breakfast Inn; you come and you go.

That ought to be a requirement for the job: one must be of age (somehow McCain is somewhere laughing at this) to get the job for the reason that I can’t even imagine a young and vibrant soul wanting to “imprison” and subject himself to a live of no privacy. You are tagged for good. It is not like you can just pick up and go to the loo. Imagine going for number one; someone will always be “riding the bus” with him.
Oops! Some already did. I guess ambition is more potent than freedom.

I wonder if anyone has ever asked them (the presidents) something to the fact: “Sir how was it?  Good?” or “Do you feel lighter now?” and does he responds: “Oh man, I needed that” or “It felt really good”.  I can only imagine the introduction, the very first days. How awkward.

Much have been said in the news, pundits and supports alike are taking their hats to the deed. Finally, the liberal media got it right – as the conservatives might say. Or perhaps, he is countering Obama’s extended courtesy during the transition period as he too refused to criticize W. Whatever their motives are, 43rd deserves his props. He is after all a person (one that me or you could call on a hot day for a cold one). Too bad his politics stunk. He could have made one good Godfather to my imaginary son.