The inauguration of Barack Obama. 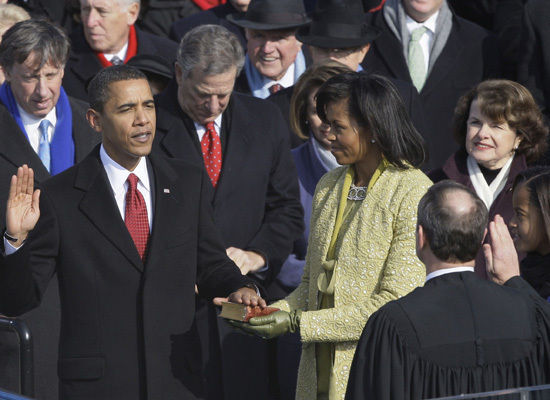 It was a cold day for Miami standards, a scanty 56 degrees when I woke up on Tuesday January 20th. Still sleepy, I dragged myself out of the bed to the bathroom. At 7:28AM, I turned on the radio to a song by Jorge Clinton, no I am not kidding; it was playing on a morning show, “One nation under a grove… they can’t stop us now”! I thought to myself,  (explecitive) how fitting! On the day our 44th President, voted by 60 million plus people is being inaugurated, the first tune I hear is one nation under one grove! Hum…! Right on!

It was just one year ago when, in a supermarket in Europe, I rolled my eye way up to the captivating images on TV above, almost close to the ceiling, as they were showing the Democratic candidates running to the White House. I also paid specific attention to the broadcasters’ comments; though, the tenor was sarcastic and suspicious as it inferred to Obama, it was smartly candid.

My friend turned to me and suspiciously asked if he had any chance, not a chance but any chance. Similar story, while visiting Africa, people wanted to know, they wanted me to utter, perhaps to convey some type of assurance or guarantee that I surely could not provide, whether or not he had a chance. Everyone just wanted to know if he had a chance of even making it half way, not all the way but half way; forget winning, they just wanted to know if he was not going to choke.

They especially wanted to know what it felt like here in the States, from this side of the pond, to listen to this guy who incessantly delivered rousing words and captivated even the most cynics of them all. I apologize, I did not want to rub it on anyone but I got my fix by attending one of his rallies so I can attest that it was really an exhilarating and indescribable experience. It really felt good and overwhelming like a girl on her way to her first date. I presume we really underrated the community organizer!

I mean, as my adopted country, having experienced prejudice at all levels and knowing the longstanding history of this country, I resoundly said NO. No way IN HELL he had a chance and left it that. C’mon, this is America and unless someone forgot to tell me something, there is no way a black man, or any man of color mind you, could become the leader of this country. Please! I mean, the South, which denotes anything and everything bigotry and scores of quiet shuttled minds who are still cocooned in their own embryo, are still here encompassing parts of the landscape. With these hindrances alone, I converted myself to believe that the Blackcap of central Europe didn’t know it was migrating east in the winter instead of its usual west cross the Alps.

I was apprehensive of his aspiration and frankly extremely skeptical. Let’s be honest and so were you! It became like Mastermind, the game where your opponent at the other end has to guess the colors of your pins and how they are positioned. I mean, there he was, this articulate individual who supposedly knew better but decided to grapple with something intangible.

I grieved intimately that he must have lost his mind. I predicted that he would be left in the middle of the road, dumped like a basket of manure to learn his lesson. How dare him yet, I was like oh my God is this possible? Can it be real? What if, really, what if; what if he really wins this how in the world America will react, how would the world itself will react? Stop it?!

The notion made my mind spin, and spanned it did; so fast it went that my feet dangled in the air and I was left without a place to land. I landed alright long enough for me to come back to earth; ET was calling.

I pinched myself at the possibility and my mind wondered as I roiled the pot and speculated that it could help if perhaps, he had a white or a light skinned wife… nuhhh, then the black folks would have turned on him so fast; another successful black man with a white woman … (scrap that!) but then again, he is no Clarence Thomas, so it would have been all right with the peeps and so so with other folks. So, I exhale! But Michelle?!! Although her skin tone is striking, I was afraid it would be a sentry post but she held herself with poise and candor of the educated and professional black woman that she is.

I too was like Bill Clinton (when he made his celebrated comment that Jesse Jackson also won I can’t remember which state). I thought it was going to be one of this one time deal when he won Iowa but as time went on, the extemporaneous speeches, the debates, the raging train attacks but his tenacity trotted revengefully. We felt the energy reverberating and it became apparent that he had an exceptional character worth embracing. People begun to warm up to him yet, the economy could not have been a better ointment; what a timely souvenir.  Still even when the pools declared that winning was all but eminent, I could not see the promise land; I was still apprehensive hiding behind the old mask that no way in hell he was going to win. The Bradley effect was harassing my nose and I was knocked up by the tang.

On November 4, I sat around waiting for the big o’l surprise, the “usual “scripted menu. I sat around biting my nails through one more so-called expert debate yet again, one more ranting talk show host and one more poll number. I waited and waited my hair going through the roof, promising my friends that if he won, I would run to my front door and then to my back door and scream to my neighbors (I was surrounded by McCain/Palin bumper stickers) that YES WE CAN, so I did. The Heimlich maneuver was performed.

I screamed my lungs out until I no longer could. I run to the doors, to the phone to whoever would hear me, I cried and jubilated with ecstasy and I am still running.

On my way to the gym Tuesday morning, I heard the story of Earl Staffer and his million-dollar investment on the radio. Apparently, Mr. J.W. Marriott, the owner of Marriott chain hotels, uses his well placed namesake hotel every four years for the inauguration but this year, he decided to stay away – no time to pull my hair to the reasons why – and the hotel came out with this dream package where anyone could use the facility for the same purpose, all included, provided the person came up with the amount. So, Mr. Staffer, the businessman, of Virginia heard of the deal and decided to take on the challenge by raising the money and inviting four hundred underprivileged people to witness history. He not only provided them with a place to stay but also with appropriate attire for the occasion.

I decided the night before to make a run to the gas station to buy the commemorative newspaper. I thought I would go early this time, as I did not want a replay of November 4. I was not late but underestimated my neighbors’ gusto.  They all wanted the same thing; so by the time I got to the gas station or any other place around the neighborhood that sells newspaper, all the English versions were gone. I ended up buying the Spanish version instead. No biggy, just a semicolon, it is the symbolism that counts.

The traffic was it slow self. It was 7:49AM and everyone was heading to work but not me; I stayed home. I was not going to miss this for anything in the world (Shuhhh, can I say that I was not alone?! I know of a few folks who joined me on the cause). By the time I get to the gas station, all the newspapers but three, seriously three were left – though there were plenty of the daily paper laying in there – and in front of me, there were five other people trotting the tribute paper with a smile in their faces. It was contagious; perhaps, I was imagining. It is worthy noting that they up the price of the paper by 25 cents but I did not care. What a way to make a buck in this economy?!

I got to the gym a few minutes later having spent only five minutes in line at the gas station and up on a treadmill. It was early in the morning so, the place was virtually empty; there were only three souls marching on. I turned the TV on to CNN to a sea of people stacked like sardines. The ceremony didn’t start until three and half hours later but they were already, patiently waiting, pestering their territory. We were told, they begun arriving at 04:00AM. I am dreaming of white Christmas…

As I watched the apparatus, I was stricken by a few remarkable newsreel scrolling on the bottom of the screen and the irony neighboring their context to the day’s worthiness, the imagery that predicates their meaning to the day’s celebration (Zimbabwe power sharing breaks down; Author jailed for insulting Thai king; Authorities: 7 dead after Brazil roof fall; String of bomb blast left 4 dead in Iraq; Sources: Obama may quick reverse abortion policy; Human rights activist journalist killed in Russia; Argentina leader visits Cuba; Hearing starts today for alleged 9/11 terrorists and Gas prices jumps 3 cents in 3 days). What an irony, interesting right?!

I could not contain myself as my brain begun to gyrate once again.  I was so fixated on the thoughts of yesterday that a flood of tears begun to pour down my cheeks. I could not escape the ghost and let it all out. No, I did not make a scene at the gym.

I came home and it was still going at it. I was overwhelmed with tears of excitement at the prospect of change. I was drunk of stupid euphoria, full of exhilarating emotion as I saw the crowd, the sea of people in the Mall braving the cold with a smile just so they could be there to witness the big event.

I woke to the world exuberating Yes, we can America! Thank you for realizing that your landscape is shifting and regardless of politics, race or religion, a capable individual has defied you; a black man became the leader of your free world, of this United States of America.  Someone please pinch me! Don’t take me wrong, racism is still here and it will always be but for now, you have accomplished something the world has ever seen or heard. Welcome Mr. President, doesn’t it feel good? Now people stand up whenever you walk in a room; get used to also being called Sir.

I often told my Spaniards friends who are euphoric at the thought of being the majority in few years that “Don’t be too happy; the white man in black suit will still be in control!” Dear friends, it is with much fanfare that I have parked the statement, as it is no longer unattainable. I had a feeling but have officially confirmed that America is really something exceptional. Yeah, much was done to reach the mountaintop and there still work to be done but it teaches us that nothing is unattainable as long as we fight for it. Patience is required however.

I am shivering with joy; only in America!